PRODUCT OF THE YEAR—LONER BRIDGE SYSTEM 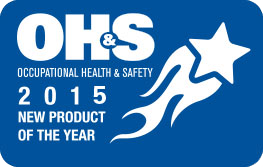 The Loner Bridge System was recognized under the "safety monitoring devices" category. Blackline also won this award in 2013 with the Loner IS.

According to OH&S the "award program honors the outstanding product development achievements of health and safety manufacturers whose products are considered particularly noteworthy in their ability to improve workplace safety."

“I congratulate all of this year’s entrants on their fine work and thank them for participating. We certainly hope they and many other manufacturers will enter our eighth annual contest next year, as well,” said OH&S Editor, Jerry Laws.

“We are honored to win our second ‘New Product of the Year’ award. Having won in 2013 with Loner IS, we address lone worker protection for hazardous locations,” says Sean Stinson, Blackline’s VP Sales and Product Management. “For 2015, our new Loner Bridge System now extends the same monitoring capability to the most remote locations using satellite communications. The success of this new innovation has significantly contributed to our growth over the last four quarters.”

Check out the winners in other categories here.